In 10 days, Qatar will set a record by being the first country in the Middle East to host a FIFA World Cup. Also, Qatar is set to attempt another Guinness World Record for the world’s largest football boot, which will be unveiled on November 14 at Katara Cultural Village. And while we're eagerly awaiting the world's largest football tournament to kick off on November 20, let's check out the official GWR titles Qatar achieved this year. Happy Guinness World Records Day! 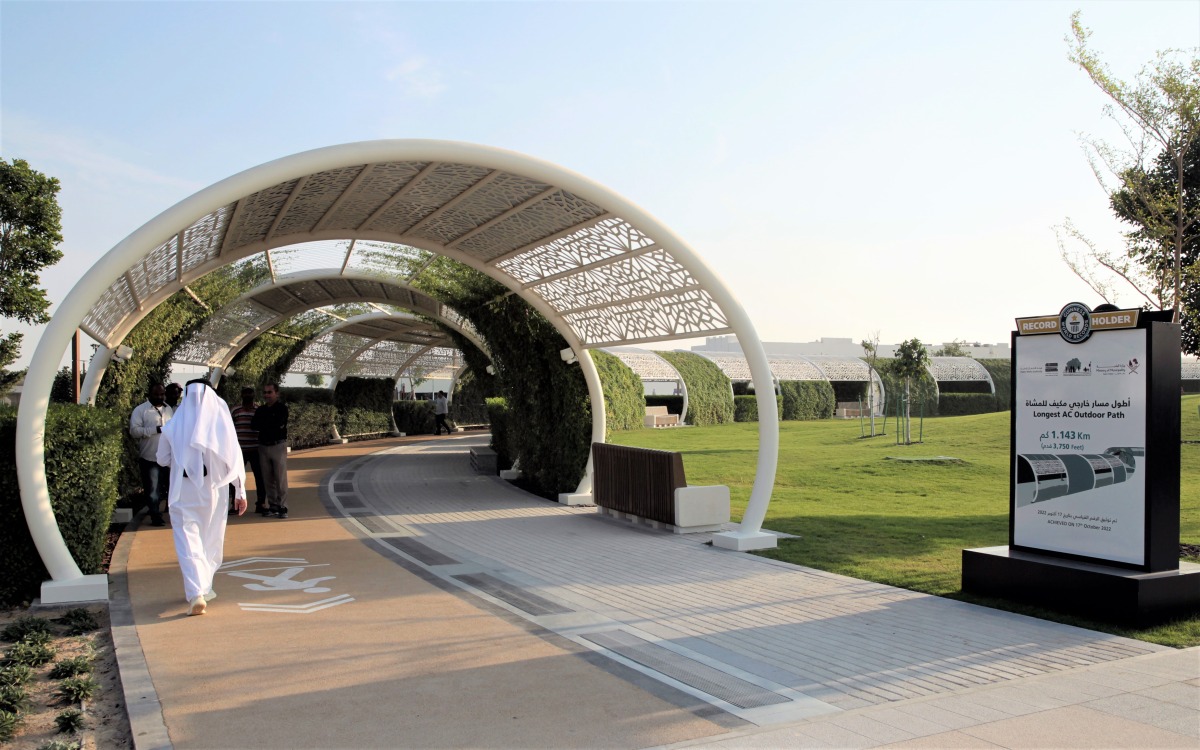 The newly opened Umm Al Seneem Park was officially awarded on October 17, 2022, with a Guinness World Records title for the 'Longest Air-conditioned Outdoor Path'. Inaugurated on November 1, 2022, the public park's 1,143-meter walking and jogging track is the fifth project of the Public Works Authority (Ashghal) to obtain a Guinness World Record. The track ensures a temperature of about 26 degrees Celsius aimed at encouraging visitors to exercise in a bid to promote a healthy lifestyle for all. 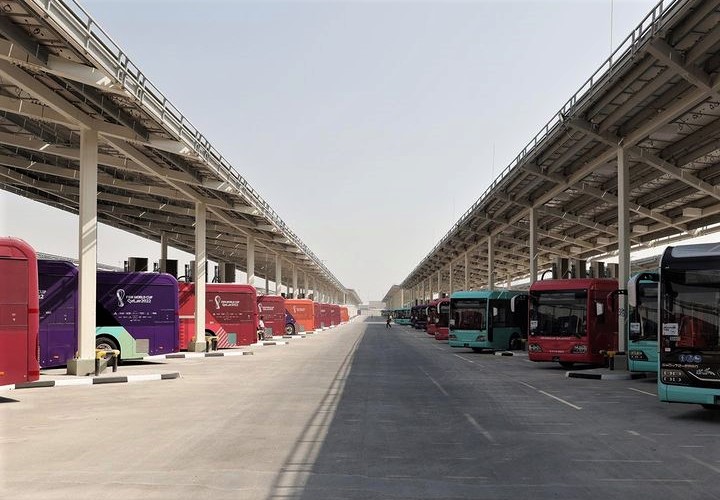 Guinness World Record's 'Largest Electric Bus Depot' title was awarded to the Ministry of Transport and The Public Works Authority (Ashghal) for building the Lusail Bus Depot, which can accommodate up to 478 buses. The electric bus depot, the only solar-powered bus depot in the Middle East, uses 11,000 PV solar panels to produce 4 megawatts of power each day to supply its buildings. Additionally, it has a designated area for Qatar's newest form of public transit, the Bus Rapid Transit (BRT) e-buses and consists of 24 multipurpose structures, including accommodation for the depot staff with a capacity of 1,400 people. 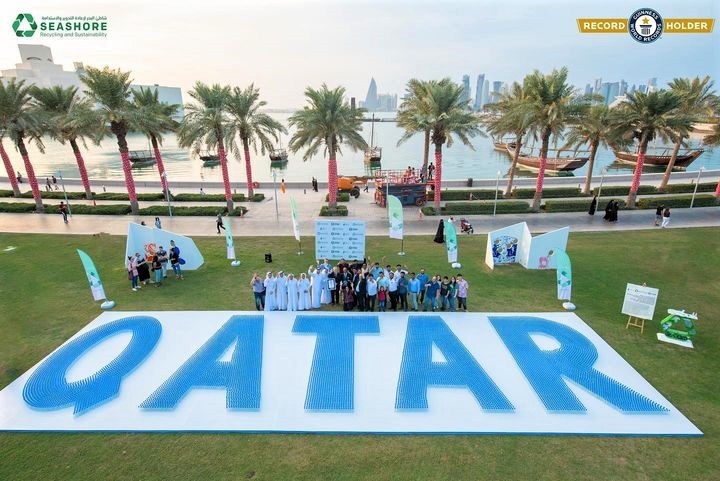 An event to form the word 'QATAR' using only recycled plastic water bottles was organized by the Seashore Recycling and Sustainability Center in celebration of the 2022 Qatar Sustainability Week. The participants followed strict guidelines to create the plastic bottle word using 14,183 plastic bottles, which earned the group a Guinness World Record title for the 'Largest Plastic Bottle Word'. Qatar set a new world record on October 15, 2022, breaking the previous record of 5,387 bottles set in 2021.

October 12, 2022
Most languages used in a reading relay 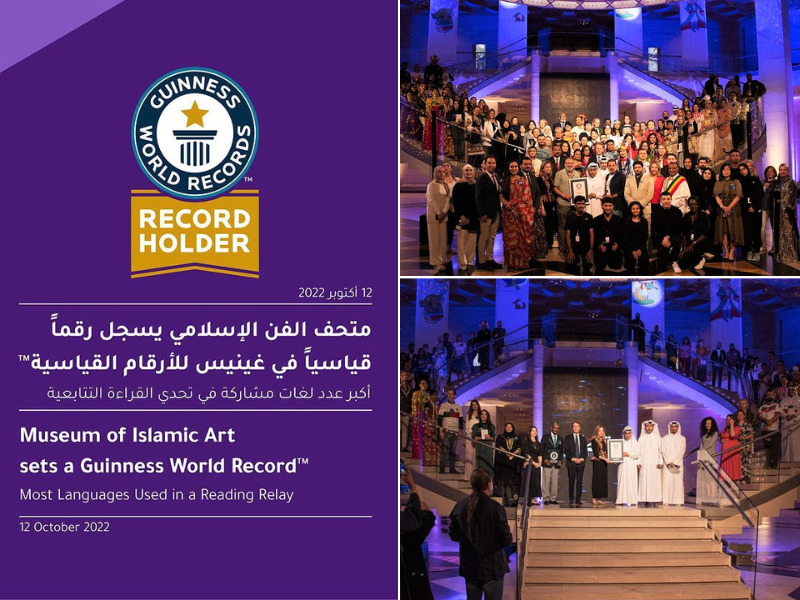 On October 12, 2022, a reading relay was arranged at the Museum of Islamic Art (MIA). What made this activity interesting is that each participant read at least one line from the book, 'The Little Prince' by Antoine De Saint-Exupéry, in a different language from the previous reader, in which they reached a total of 55 languages, allowing MIA to set a new Guinness World Record! The entire reading took one hour and 19 minutes, and a total of 177 participants took part in the successful attempt, including readers, judges and volunteers. 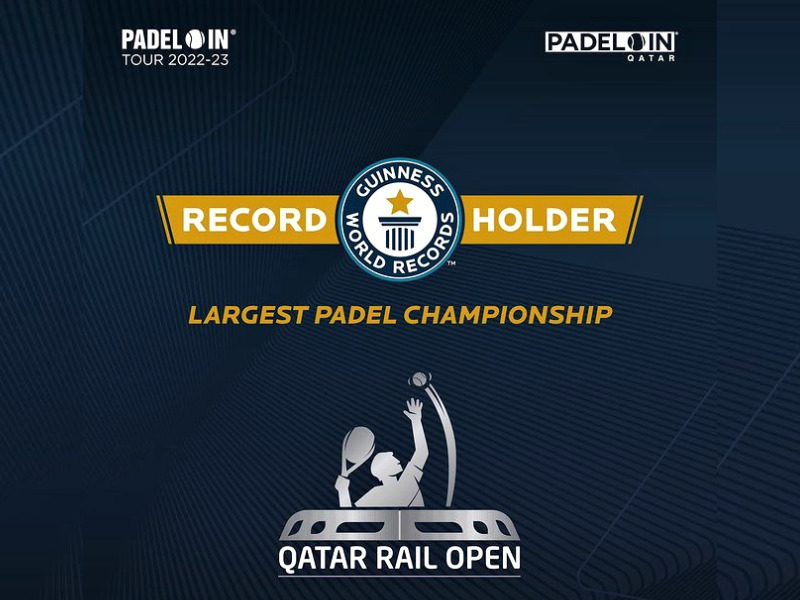 With the staging of the biggest padel competition ever, Padel IN Qatar, through Qatar Rail Open, now hold the Guinness World Record for the 'Largest Padel Championship'. According to Padel IN, the purpose of the record was to demonstrate the significant Padel-playing community that exists in Doha. A total of 778 men, women, and juniors participated in the championship, which lasted for 7 days. 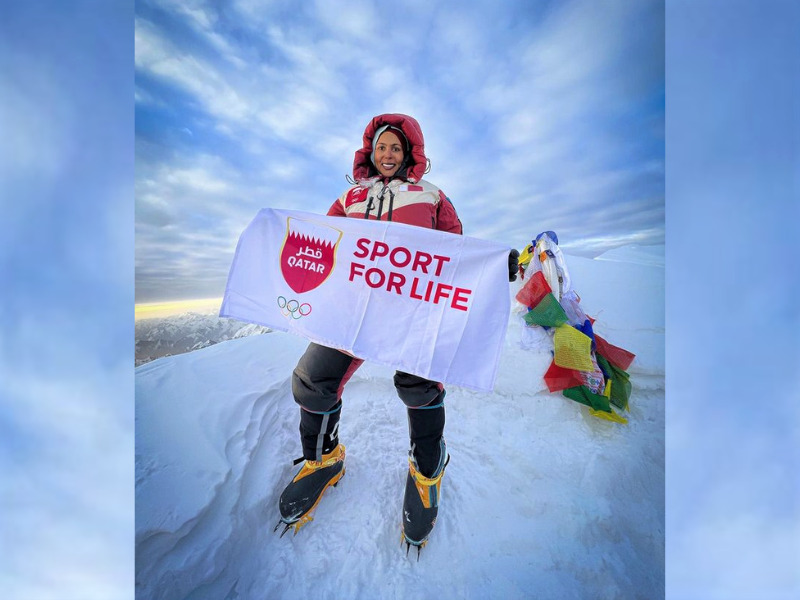 Qatari mountaineer Sheikha Asma bint Thani Al Thani has set record after record in mountain climbing! She made history as the first Arab to scale six of the 8000ers in the world. On July 21, 2022, Sheikha Asma broke a Guinness World Record for being the world's 'fastest female to ascend Everest and K2 with supplementary oxygen'. Within only 56 days, Sheikha Asma was able to reach the peaks of both Mt. Everest (May 27, 2022) and Mt. K2 (July 22, 2022). Through her 'Beyond Boundaries' journey, she not only wishes to complete the 'Explorers Grand Slam', to which she is only one summit away from climbing, but she also wishes to inspire and show others, most especially women and young people, that anything is possible if you move forward with passion and conviction. 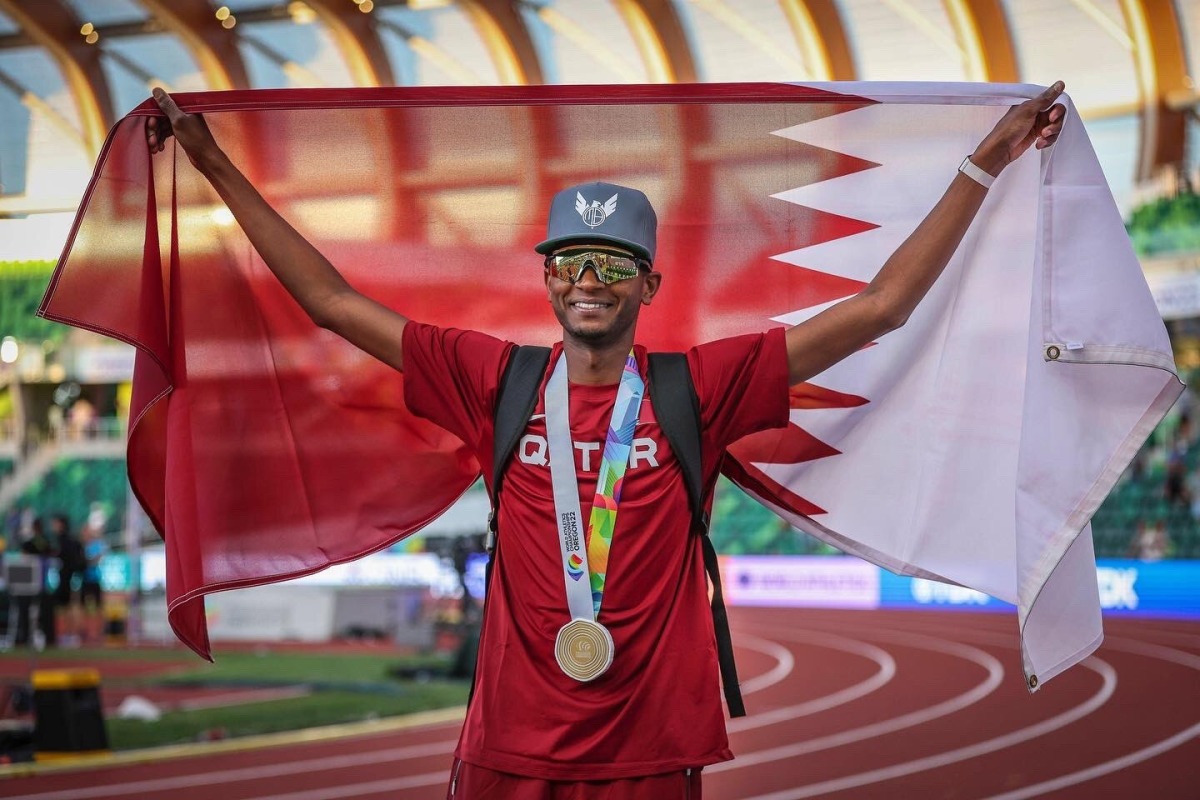 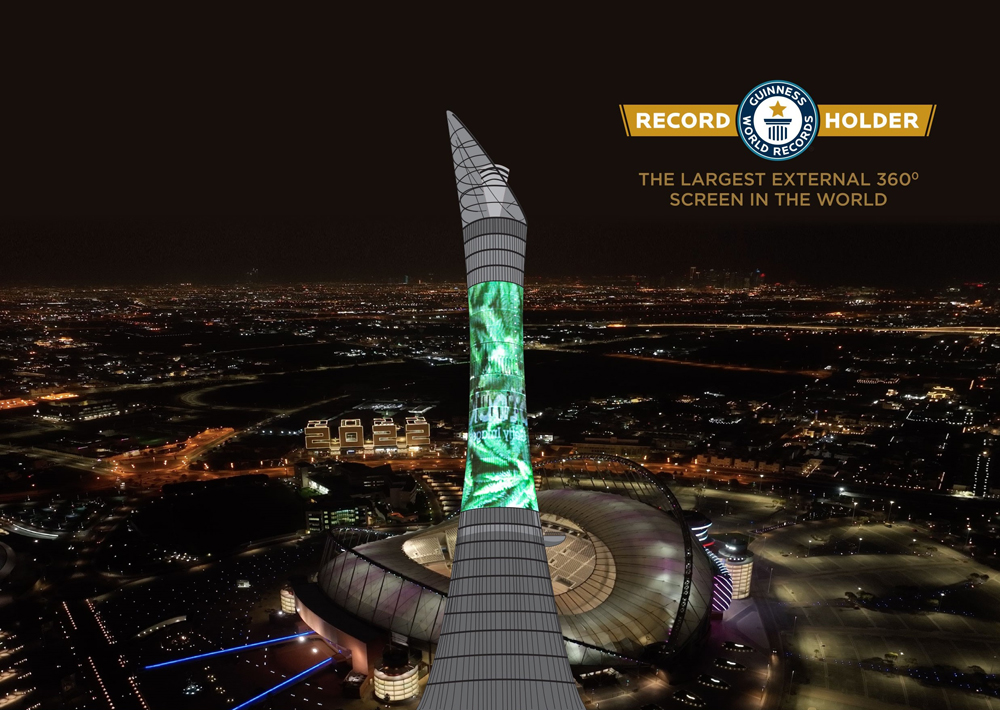 The Torch Doha, which was originally built and shaped to look like a huge torch for the 15th Asian Games in 2006, is the result of considerable architectural, technical, and technological design. Although it is not the tallest tower in the world, on May 31, 2022, it was able to set its own Guinness World Record for having the "largest external 360-degree screen” all around the tower. The screen measures 11,345 square meters (112,116 square feet and 81 square inches). The achievement was celebrated when the screen was officially launched on June 13, 2022, wherein it showcased a video featuring the FIFA World Cup Qatar 2022, complete with a fireworks display and laser show. 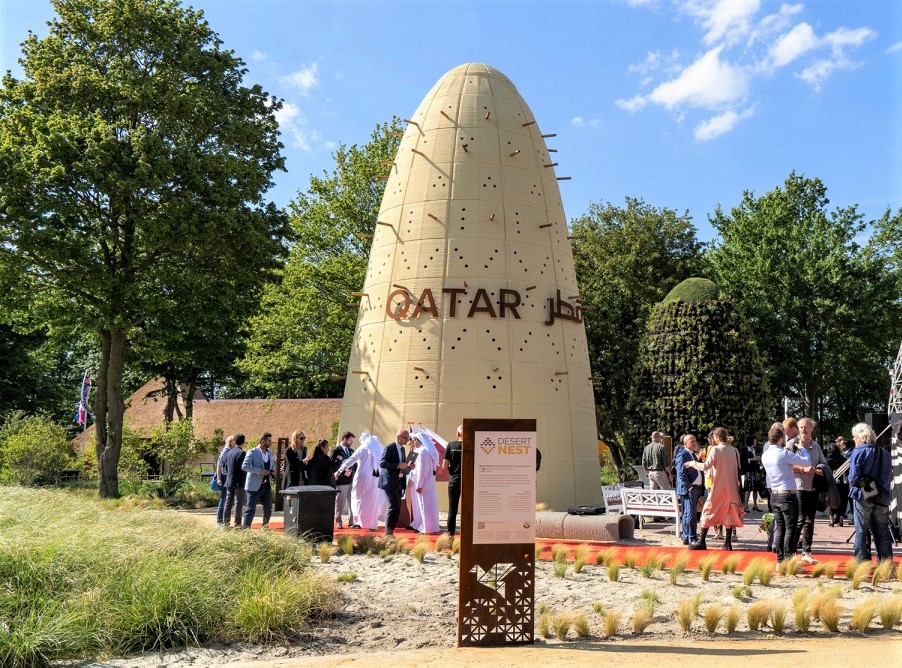 Technology is indeed becoming more and more advanced, and this is evident with Qatar’s pavilion in the Floriade Expo 2022 held in the Netherlands. Under the theme, ‘Desert Nest,’ Qatar’s entry into the Expo was inspired by the numerous pigeon towers in the country. The Qatari team constructed the tower out of concrete and other sustainable materials using 3D printing technology, which, as a result, broke the record of the "tallest tower made of 3D-printed concrete.”  The tower is 12.1 meters tall and was built in 11 days over the course of around 100 hours of labor.

March 25, 2022
Most nationalities in a yoga lesson 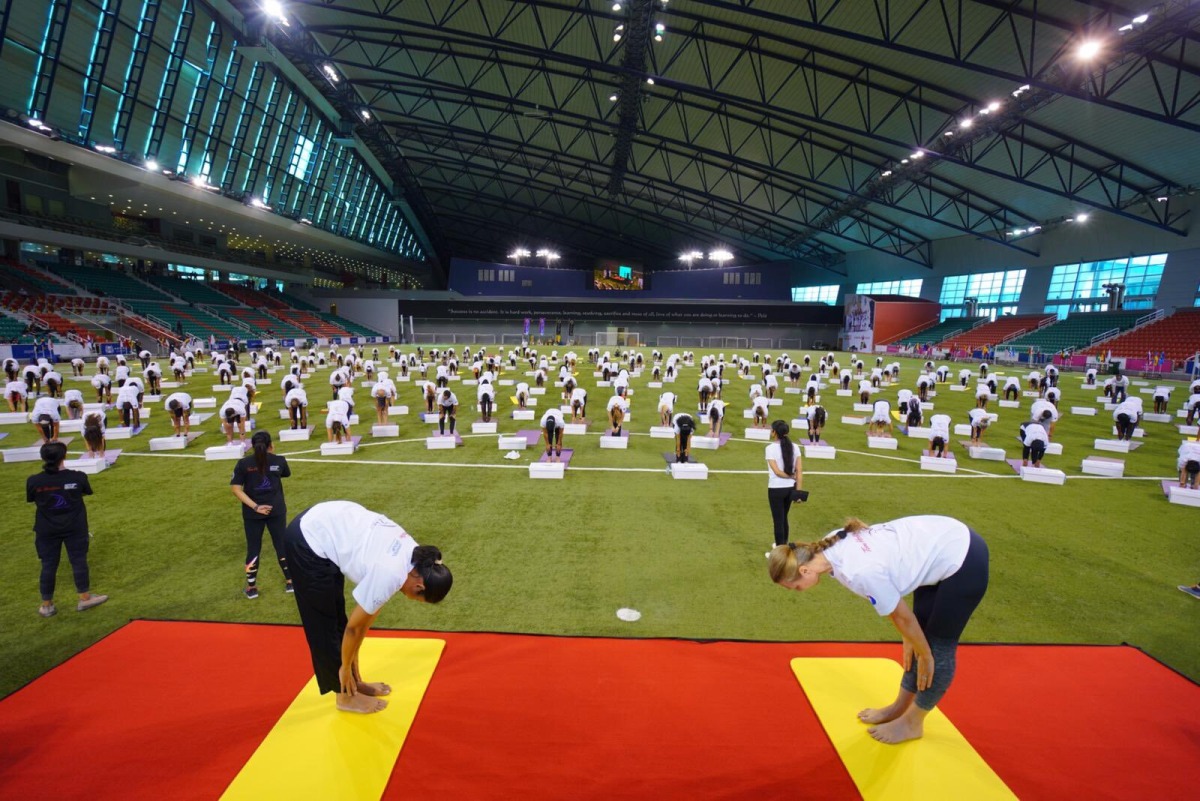 A yoga class organized by the Embassy of India's Indian Sports Center was able to gather 114 yoga enthusiasts of different nationalities each wearing a sign to represent their country of origin. The event held at the Indoor Football Pitch at Aspire Academy lasted for 40 minutes during which participants simultaneously did different yoga postures and poses. Along with attempting to break the previous record of 112 nationalities in a yoga class, the organizers also held the event to bring together people from different nations and to honor Qatar's multicultural society, as well as the approaching FIFA World Cup Qatar. 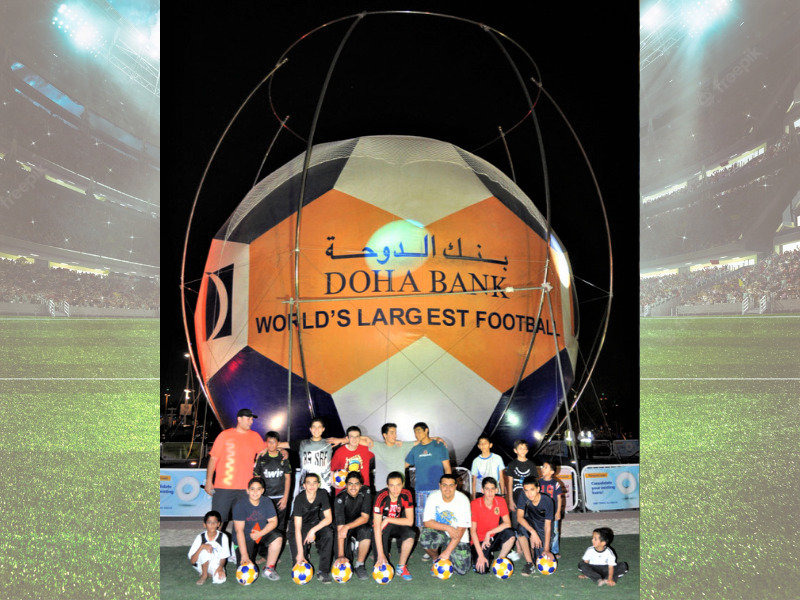 In 2010, the bidding to earn the rights to host the 2022 FIFA World Cup was rightfully earned by Qatar, making it the first country in the Middle East to host the biggest sporting event. Having earned that title, Qatar did not just stop there and earned itself another Guinness World Record in 2013 for having built the world's largest football! The project was developed and financed by Doha Bank to promote the nation's expanding involvement in international soccer, as well as to celebrate the upcoming hosting of the 2022 FIFA World Cup. The ball, created using the same materials that are used to manufacture an original soccer ball, as stipulated by FIFA guidelines, was originally built in Pakistan by 15 people for 4 consecutive weeks. It was then deflated and shipped to Qatar where it was unveiled in the parking grounds of Lulu Hypermarket on D-Ring Road. The soccer ball has a circumference of 38.30m (125ft, 8in), and weighs 960kg, beating the previous record by over 2 meters and 200 kilos!