Doha: Chairperson of the Board of Trustees of Qatar Museums (QM) H E Sheikha Al Mayassa bint Hamad Al Thani inaugurated yesterday the TotalEnergies stadium in Qatar located in National Museum of Qatar which offers a distinguished experience for families to explore the history of energy in Qatar through the purposeful play.

The inauguration ceremony was attended by Chairman and CEO of TotalEnergies Patrick Pouyanne, along with a host of senior personalities.

The playground comes under the patronage of TotalEnergies within the partnership framework between TotalEnergies and Qatar Museums designed by Taylor Cullity Lethlean (TCL) and constructed by Public Works Authority (Ashghal). 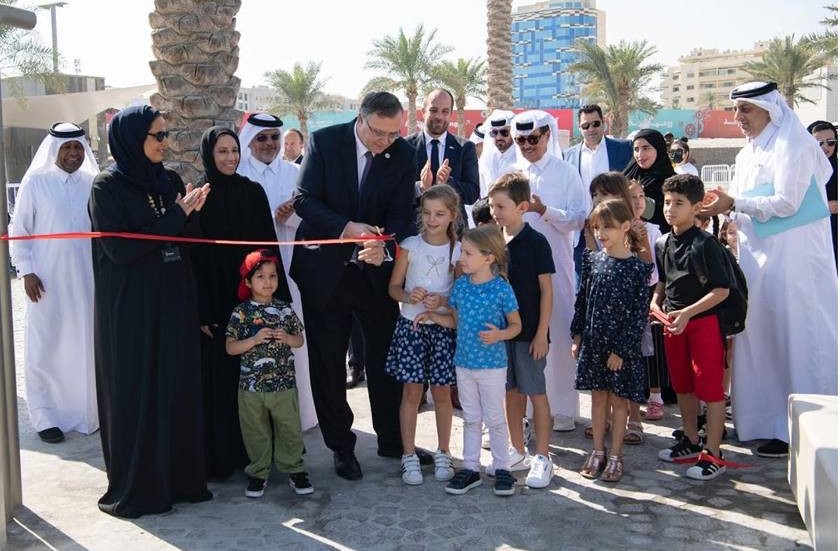 It is designed to offer full educational experience where visitors from all age groups can get familiarized with the various energy sources in Qatar ranging from oil, gas and liquified natural gas (LNG) to renewable energies and electricity, where the concept of sustainability is also addressed through numerous topics, such as carbon sequestration and storage, Polymer recycling and traffic safety.

Shaikha Mayassa said that the playground is one of many that were constructed across Qatar, in pursuit of helping the community individuals and visitors enjoy them through communication with their families and friends, reacting with the nature and enjoy times in outdoor, where they can reach out to a larger community and communicate with the visitors to introduce the rich heritage of Qatar, and improve our life style, expressing her appreciation for the partnership forged between Qatar and TotalEnergies.

In a similar statement, Chairman and CEO of TotalEnergies Patrick Pouyanne said that he is proud of the partnership between TotalEnergies and QM, especially with this distinguished project provided to the Qatari children which combines education and entertainment in a superb environment, pointing out that energy along with culture are considered a crucial part of the history of Qatar.

For his part, Deputy VP HR, Communications & CSR at TotalEnergies Abdulla Mohsen pointed out in his statement to Qatar News Agency (QNA) that the playground has been constructed for the sake of finding a platform for the families, citizens and residents to simultaneously undertake the educational, recreational and cultural role and have a glimpse of energy, noting that through this stadium the children will discover that it is different from the remaining stadiums and other parks.

Commenting on the inauguration of the that coincides with Qatar’s hosting of FIFA World Cup Qatar 2022 finals, Abdulla Mohsen underlined that such inauguration is an occasion to inform the tournament fans through this stadium about the enormous evolution and renaissance Qatar is witnessing in all fields.

For her part, Senior Project Engineer at Public Works Authority ‘Ashghal” Aisha Al Sada said the playground has been designed by the Australian company TCL and constructed by the local contracting company GET, and owing to the excellence and the details involved in every part of the playing field, Ashghal was able through the support granted by their high management, along with the confidence to live up to our commitment in completing the project in a timely manner.

Al Sada pointed out that the project was not the first one between QM and Ashghal, indicating that she hopes to work in lockstep with QM to implement further projects and participate together in the cultural renaissance of Qatar spearheaded by QM. The Labyrinth-like architecture of the playground includes 15 interactive play areas, each one handles a specific type of energy, along with a series of tunnels in the form of large tubes for children to use as passages. The stadium also includes a water play area, and aims to provide a sustainable outdoor environment stimulated by human energy.

Other features of it include mist fans to cool the atmosphere around the games. The design of the stadium is sustainable, as it is partially powered by green electricity emitted from solar panels installed nearby the stadium.